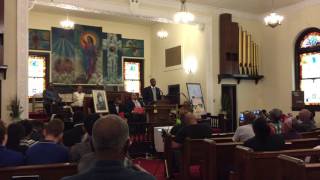 Last week, I had the opportunity to attend a remembrance service marking the 125th anniversary of one of the most tragic and horrific events in Memphis history: the lynching of three African-American operators of The People’s Grocery. In 1892, three men – Calvin McDowell, Will Stewart, and Thomas Moss – were arrested for defending themselves during a raid on their store, then, several days later, seized from jail by a lynch mob and executed. Both today and at the time, the ly

Organizing for Action in the North Medical District

We launched the Just Health Table!

The Myth of Normalcy - by Brooke Sarden